Too Much Beer For TURBONEGRO !!! 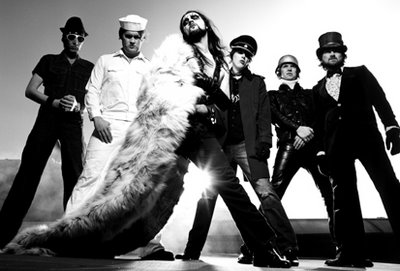 This rock’n’roll and beverages-related story is true:

Daughter of a lady who works in the same office as me has a summer job cleaning rooms in a President Hotel in the centre of Helsinki.

Last weekend there was the annual Ankka Rock Festival in Helsinki and on sunday the hardest rocking and most decadent and homo-erotic rock band that ever came out of Norway (excluding Burzum, of course), the mighty TURBONEGRO played at the festival.

Like many artists coming to Helsinki the band stayed at the President Hotel. In the afternoon of the next day, hours after the regular hotel check-out time, the aforementioned daughter was knocking on the door of TURBONEGRO’s room in order to clean it. The band, of course, was still in there. However, they were very polite, apologized and asked her to come around again after an hour. When she did, they were finally leaving and in order to thank the girl, they tipped her by giving her 1 and ½ big cases of Heineken beer that they still had. Nice!

But what does that mean? TURBONEGRO cannot finish all beer they had hoarded? Or, there were not enough party people helping them out with all their beer or what?

After hearing this story I suggested that they should sell the beer in Ebay as “Special TURBONEGRO Heineken Party Beer – undrunk, unopened can!” one can at the time and make good money but apparently they were just going to drink it with her friends.
Posted by Kriton Music at 1:16 PM

A great post, makes me wanna grab a glass of chilled brewsky.

I just made one funny remark: almost all our blog entries headlines end with an exclamation mark. It means that all we have to say must be really important!!!!!, right :-)

Exclamation! marks are the best!!!
And question marks too???

Duuude!!!! we love them exclamation marks!!!! just like my favorite magazine (and employer) Suosikki!!!! As in Kultaturbo(negro)!!!!