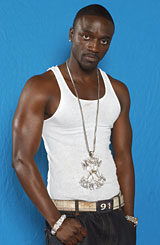 Yeah, that's Akon's catch phrase, that's how he seems to begin every new song he features in. That habbit itself is nothing new, it's a common jamaican deejay thing: Vybz Kartel's got "up to di time", Beenie Man has "Zigga Zow" and Elephant Man's got "Chu know..." and so on and so on. It's a good way to make yourself known, that's like "sonic branding" or whateva.

I just heard the new Rick Ross album "Port Of Miami" (which is a banger!) and I just have to say that Akon is the man. The ever pompous song "Cross that line" with Rick is a sure hit, at least at casa de Hennessy. I mean, the guy's done "Soul Survivor" w/ the Snowman, "Locked up", "Ghetto", "Trouble Nobody" and he pretty much produces the stuff he does himself. Ok, Akon (born Aliaune Damala Bouga Time Puru Nacka Lu Lu Lu Badara Akon Thiam if you trust wikipedia) did that annoying "Lonely" tune, but that probably made him a lot of money too. An some enemies as well.

Akon should be releasing his nnext album soon, it should be called "In your eyes". So It's convict time y'all!
Posted by Hennyman at 8:36 PM

Jepp. And after this Akon post, we seem to have a Bentley ad on the top of our page. How cool is that?