Peace In The Middle-East, please. 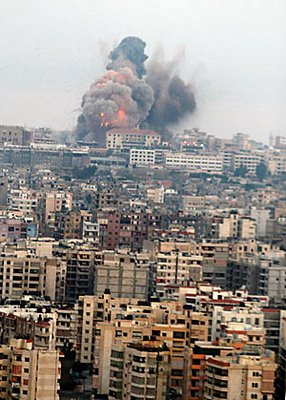 I think that now is the time to say at least something about what is going on in the Middle-East.

The thing that came into my mind recently while reading about the current crisis in the newspaper was how during my Metalhead-period, one of the coolest bands used to be the notorious and legendarily politically UNcorrent S.O.D (Stormtroopers Of Death) and they had a song called ‘Fuck The Middle-East’, which went something like “FUCK THE MIDDLE-EAST, THERE’S TOO MANY PROBLEMS!!!”. That used to sound quite appropriate back then in the 1980s.

However, when I checked out the rest of the lyrics now, I don’t want to quote them more than that first line because now it seems to me like Billy Milano, Scott Ian and co. were like deranged little brothers of George W. Bush (if that concept is even possible to imagine) . But they, they must have been ironic, yeah? Another S.O.D. favorite was always ‘Ballad of Jimi Hendrix’, which consisted of about 2 seconds of guitar noise and the lyrics ‘HE’S DEAD!”.

Anyhow, about the current crisis; I have really nothing to say about those soldiers - from either side - who have died but the latest ‘collateral damage’ ie. civilian victim count is that 27 Israeli civilians have died, against over 900 Lebanese civilians, about 1/3 of whom were CHILDREN of under 12-years. Add to that the fact that about one million Lebanese people have had to leave their homes in order to escape Israeli army’s extremely randomly spread bombs.

Then there's the whole environmental disaster of millions of gallons of spilt heavy raw oil that has apparently already destroyed the whole eco-system of the Lebanon's coast etc.

Fuck all that. You know whose I am on. But all this makes sad.
Stop it already, alright?!
Posted by Kriton Music at 11:45 AM

The other day I saw an ad that best describes the whole situation. It was a print ad that had the classic skyline of Manhattan NYC, with WTC still standing. And the copy said something like: "Imagine a world without religion".

Another thing that makes me sad is that religion seems to be a drug, that some people can't handle.

E.g. there was a basically anti-war demonstration here in Helsinki last week, with a lot of people thinking that Israel should stop the hell bombing the lebanese peeps. But when the demonstration clashed with some christian peeps who just happened to be on their way preaching their biblical agenda things got a bit hot, things got out of hand. A demonstration against war turned into more like a fight between "my god" and "your god". I wasn't there, but this is what the newspapers said. If Someone was there, I'd like to know what was the case.