Mobile Ringtones to save the music industry? 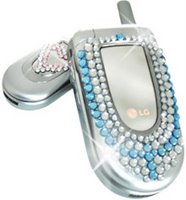 The music industry and especially the big corporations have been worrying sick about not selling as many cd's as in the past. P-2-P -sharing is a lot bigger problem for them that old skool pirate cd's sold on the streets.

Here is where the rappers come to the resque. In the US this summer has been a succes for companies selling mobile ringtones and in the forefront have been rappers like Chamillionaire and Rick Ross. Below is the article from Digitalmusic.com:

Rapper Chamillionaire has just raised the bar on master ringtone sales by shifting three million tones. The accomplishment is for the smash hit "Ridin," which has enjoyed heavy spins and incredible momentum. Fans have a number of ways to grab the tone, including on- and off-deck options, and the artist has positioned the ringer aggressively on his website. The nosebleed result is part of an overnight mobile treasure chest for artists, particularly rappers. Chamillionaire, inked to Universal Motown Records, previously reached the two-million mark faster than any other artist. Several others have crossed the million mark, and fresh records keep pouring in. Earlier, rapper Rick Ross, signed to Slip-N-Slide/Def Jam, surpassed sales of one million master ringtones late last month. The Ross accomplishment represents the first time an artist has reached that level ahead of an album release.

That's a funny business, aye? With the new phones models everybody with a computer & internet connection could easily make those ringtones for free for themselves, but they still chose to downloadit for money...
Posted by Hennyman at 9:09 AM

I f**king hate ringtones of any kind! But where is the offical Bilboard Ringtone Downloads Chart? Or is it there already?

There is one on Viva-channel, but I guess it represents only the german taste in ringtones. Which is something you might like :-)

Ok, Billboard.com has on as well.

jzzi, maybe you should get rid of your mobile phone then, aye? well, most ringtones are a b**ch, but theyre also useful as hell. i mean, how else would you know that someones trying to call you?

so I say: if you have your celly on in public, let it rather sound like Hustlin' or Ridin' than friggin Dragostea Tin Dei or Für Elise. Or how about the Benny Hill theme?