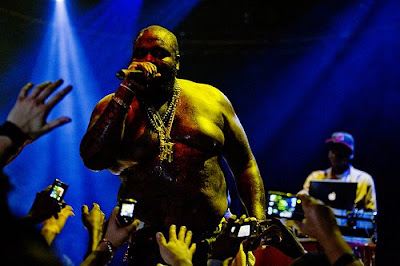 I'm finally convinced that Rick AKA Ricky Ross is the biggest boss that I've seen thus far. After he took his shirt off during his set at Nosturi last sunday, there was no question who was da bo$$ of the hip hop game 2008. I mean the dreadlocked sidekick was all pumped up, tattooed and cool in every aspect, but Rick put him deep into shadow, both in looks and style.

The whole set was pretty daymn good, from my new favourite "Speeding" to the obvious hustling anthem "Hustlin" (!). And to top it all he also performed "Cross that line" that is by far the best cheesy anthem there is. Not that many rappers actually sound that big on stage.
Posted by Hennyman at 4:05 PM 7 comments: Links to this post

Check out our doods Top Billin making s**t happen in Canada, on tour with M.I.A. You know the deal... this is very impressive stuff! BTW new Top Billin/New Judas split 12" out now AND the brand new Top Billin Ep "Sexy Time" out SOON. Suomi nousuun, perkele!
Posted by Fiil Inc at 5:50 PM No comments: Links to this post

All The Girls Standing In Line...

Like Jzzi pointed out earlier today, the first good song from N.E.R.D. in a long time. I especially luuh the way this song starts - str8 2 bizniz, not beating around the bush.
Posted by Hennyman at 6:41 PM 1 comment: Links to this post