Osama Loves Whitney - and other stuff too... 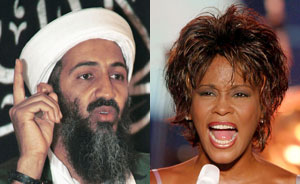 You probably already read this everywhere but it is still really fascinating to get inside the head of AmeriKKKas Most Wanted man.

"Kola Boof is a Sudanese poet and member of the Sudanese People's Liberation Army. She claims she was kept as a sex slave by Osama Bin Laden in Morocco in 1998. Kola tells us that Osama:

· Is a big fan of Miami Vice and McGyver
· Answers to the nickname "Somi"
· Liked her to dance naked to B52s' Rock Lobster, while he shouted at her "Dance like a Caucasoid girl!
· Respects Van Halen
· Is very good at deep sea fishing
· Liked hunting birds and wild boar
· Was obsessed by Whitney Houston

After this I don’t really get it why he hates western world? Maybe we should send Dave Lee Roth, Whitney, Don Johnson and the guy who palyed Rico Tubbs, McGyver and The B52’s to meet him and to try to chill him out a bit. They could party, go fishing and hunting together and watch old Miami Vice episodes and do all kinds of cool stuff together. Maybe 'Somi' wouldn't feel so much like blowing up aeroplanes and skyscrapers after that anymore.

It was also reported somewhere else that Osama thought that Whitney is the most beautiful woman in the world and he was very much concerned with Whitney's apparent drug problems, which he felt were caused by American culture and her husband Bobby Brown. And because Bobby had 'brainwashed' Whitney, Osama even threatened to have Bobby Brown assasinated. Osama also wanted to give Whitney as a present a villa he owns in Khartoum, Sudan.
Posted by Kriton Music at 1:49 PM

- Miami Vice is about MI
- Van Halen is from CA
- B52's is from GA
- deep sea fishing or hunting are not big in the big apple
- Whitney is from New Jersey, not Manhattan