Question: Why is it…? 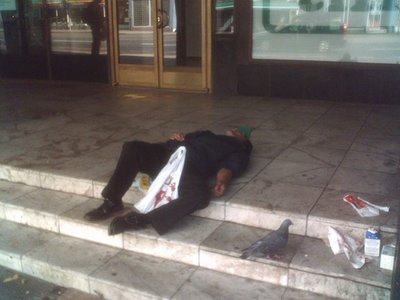 You remember that old Sadat X track, “F**K DAT!”? I do. Having bit of an attitude is always good thing, it’s a survival thing if you are living a urban jungle. Letting out your anger is also good for mental health, I suppose, so here we go. Here are four irritating/stupid/fucked up things that I encountered during last weekend:

1.) Friday noon, outside my office building here in Sörnäinen AKA 'Kurvi' there was an old alcoholic/substance abuser passed out on the street. Just like that. Next to people standing around waiting for their busses and so on. Yeah, this is bit of a rough neighborhood but whatever. Fuck that.

2.) Friday evening, we were on our way to movies. In the tram there was this complete postcard punk guy with his big stupid pink mohawk-hairdo, piercings all over his face, customized leather jacked with all the necessary gear, boots & braces and whatnot. However, I simply could not help hearing while he was discussing different types of English imported ciders and their taste characteristics like a bloody connoisseur with his pal. What’s up with that? I have heard about cider punks but in my world real raw/grungy punks drink that nasty home-made alcohol (‘Kilju’) until they pass out, not snotty & expensive foreign ciders. Get a life you middle-class poser.

3.) Saturday noon, I was leaving my house and there was an old alcoholic/substance abuser passed out/sleeping by the wall of the next building from our house. While I stopped to check him out and to document the scene by taking a photo, another old drunken guy arrived and made sure that the guy on the ground was alive (he was apparently just sleeping…). The second guy thanked me for caring about my fellow man and blah blah. Whatever. Those drunks are major obstacle for increasing of the real estate prices in my hood. Not cool.

4.) Our Internet connection was not working from friday morning to sunday afternoon. That’s fucked up too. Yeah, it’s been cutting on/off a bit every once in a while but never for such a long time. Well, I called my ISP and finished the contract, since they were asking for it. Besides, it’s good to change your ISP every 6 months or so, so that you get all the good deals like 3 first monthly payments 50% off.
Posted by Kriton Music at 1:32 PM

I gotta tell you, i'm enjoying these confessional blog entries more and more all the time!!
Jzzi you are the ruler of the Vallila precinct!