Kill Your Coke!!! And Pepsi Too! 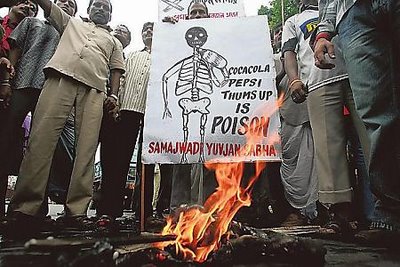 After my Peace in the Middle-East blog entry I want to bring in more social consciousness and awareness and to “infotain” you with some news from India.

The state of Kerala in South-western India banned completely selling Cola Cola and Pepsi after Indian research team claimed last week that they had found alarming amounts of high pesticide levels in the cola drinks. Four other Indian states have already banned selling cola-drinks in public schools and state offices for the same reason. Kerala is the first state that completely bans cola-drinks. It also happens to be politically one of India’s few leftist run-states.

Everybody knows that drinking cola drinks and especially all those low-sugar light cola drinks like Coke Light, Pepsi Max etc. cannot be very healthy since all they contain is water and a lot mysterious and scary chemicals. But when you think about all the environmental problems and disasters (one of the worst example being the Union Carbide Disaster in Bhopal in 1984, claimed by many as the worst industrial disaster in history) in developing countries, this all makes sense.
Posted by Kriton Music at 12:33 PM

I for one am totally a pro-light/diet sodadrinks-man. I mean, in a tightly regulated EU environment one of the least worries one should have is the effect of diet-coke to one's health. At least in heavily populated urban areas or industrial areas the stuff that we breath must be way more hazardous... This doesn't mean that the case could be different outside the EU. But if a brand has a significant market share (e.g. pepsi)in a well developed market area (e.g. EU) they simply cannot afford to make such mistakes - so I say it's mostly urban legend that diet sodas are all that bad for you. Of course all artificial stuff is bad for you , but then you should ban coffee, processed cheese, milk... and so on

The thing about poisonous pepsi in India and probably in many other developing countires too is the fact that they use local ingredients to make it there and those ingredients are contaminated due to stuff environmental issues like the Bhopal disaster and general lack of control over there -> local pepsi/coke-manufacturer not caring about these things anyway.

That's true I guess. Nokia seems to be one of those global brands that is very conscious on these things - they have people who's job is to make sure that the working conditions are ok and no violations are made globally and they use this fact strongly for PR purposes. That's kinda trendy nowadays. In business jargon the mantra is Corporate Citizenship or Corporate Social responsibility. I wonder how big a role Naomi Klein actually had in all of this?

... This blog seems to be getting

conscious media. We should blog more about beer and hiphop.

When it comes down to sippin on some sweet, I'm mos def a regular Coke/Fanta dude meself. But that is not often, since i have cultivated a "grown up" taste in beverages. Therefore i prefer orange juice, mineral water (Perrier, anyone), tab water, beer and wine to them sweetwaters.

But you are correct, we should blog more about beer and hiphop. And chicks. Now, I'm trying to follow all this political/conscious hype, but still I wonder: how big a role Naomi Campbell actually had in all of this?