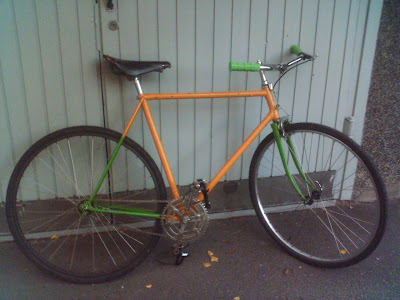 Back in early September I reported about how I salvaged a complete Soviet-made 1970s Kharkov XB3 road bike from a trash dumpster and I promised I will convert it into a trendy fixed gear bike. Well, now the bike is ready. I've been riding it for a long time already but the build was not completely finished until now.

In my original post I talked about having to get lot of new parts but in the end I found out that there was actually no need for stuff like new bottom bracket because it was just fine, then I just couldn't get the old cottered cranks off without destroying them, the double-chainring was usable as such and so on and so on. In fact, even the original tube tires, which proudly said CCCP on the sides, held air when I pumped them. As for the rest of the bike I can say that the best part is the frame-set, it's an old school classic road bike lugged steel-frame. I've no idea of what kind of steel the tubes are but the frame is very light just as it should be, and much lighter you would expect any old russian bike to be. And the size was also just right for me.

Anyhow, along the building process I decided that since the bike was free in the first place, I was not gonna use much money on it. As a result the only new things I bought for it were the funky color-coordinated kiwi green Oury BMX grips and one new inner-tube. Everything else on the bike is either original, taken from my other bikes, my parts box, scavenged somewhere or from the local recycling center bike workshop's parts pile.

The bike is intended mainly as my winter/rainy weather beater/commuter-bike and I will still put a fender on the back wheel once I find that one missing right size screw from somewhere. The gearing is kinda light (40X18), for winter use, and for the same reason the tires are of the knobby cyclocross-kind.

And no, I will not post a picture of my bike on Fixed Gear Gallery, Velospace, Pinkbike or any of those places...
Posted by Jussi at 12:26 PM

sure, but i saw it posted on Facebook! dude, you're caught.

I love the colors still.

In fact I was thinking about getting some red 1980s BMX top tube pad for the bike to make it totally Rasta, just like you suggested.

Then I only need to haul my ass all the way to Jamaica somehow, the light gearing and those cross wheels on the bike would handle those muddy roads and paths up in dem Blue Mountains just fine.

i can also lend you one of my "Jamaica"-stickers for your project - self-imported from the island, of course!

plus, dont forget the hidden weed bag under the seat!

Hmm. If you can make guitars out of cocaine (see the post after this one) then you could make bike frames out of weed, right? Weed's supposed to be made of real strong fibers, so it could be done... SO you better check that frame as well. Although if it's from CCCP, there could be some weird drugs there, developed in the cold war -era.

post your bike on fixthestreets.com . It's a new site and we'd love to have ya!