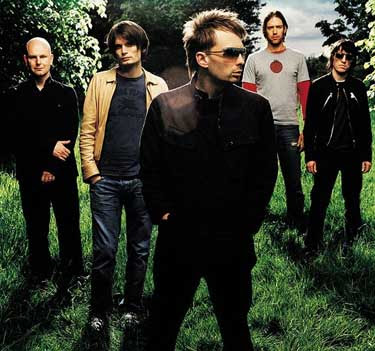 Ok. Now that everyone has bought a download of the new Radiohead album 'In Rainbows', and paid something or not for it, it is time to lift the curtain and tell the truth about the whole hulabaloo.

1.) The album is quite nice, IMHO. More pop than the last albums, less 'experimental' for sure, but the songs are actually pretty good.

2.) 'The whole buy the donwload and pay how much/little you want thing' is one big hoax, just a big marketing gimmick.
Why? I'll tell you why. The downloadable album is encoded at crappy 160kbps. It's like a damn C-cassette. Anyone who paid more that 1 Euro for that donwload is an ass. Sorry.

Come on, do you actually want to pay any money for audio quality as poor as that? No, you don't, or at least you should not - as a paying customer, that is. Anyone who actually listens to music and appreciates the audio quality at all - and I'm not talking about those audiophile jerks-offs who listen to their €€€€-costing cables during their lonely nights at home - have to wait until January or whenever the cd is actually going to be released, period.

Also, this shows that Thom & boys are really smart. Good for them.

EDIT:
I just found out that the downloadable so-called-album does not even include all the songs. The actual real cd/double vinyl album will have more songs than the ones released last week. This fact only proves my points.
Posted by Jussi at 7:41 PM

Thank you Jzzi! that was the most important point to be made out of the whole radiohead download album craze.

People don't be idiots and pay for crap quality.
It's 320 kbs or nothing, bitches!

I just noticed that there are in fact some people in Soulseek who claim to have the full album in 320kbs version for share... interesting indeed.

I guess they have converted the 160 kbs files into 320 kbs files just to raise interest among their nerd peers...

yep, thats probly the case.
anyway, i found no such thing. but record's pretty good though, even on lower bitrates!