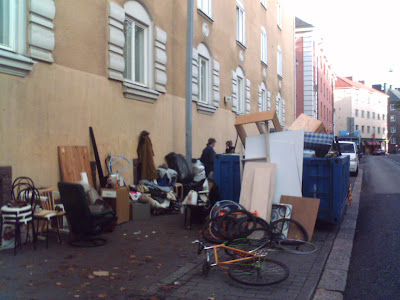 All right, check out the photo. It’s taken last Saturday afternoon on Mäkelankatu, right next to where I live.
A real Street Market – in the best Vallila style.

So what’s actually going on there? Apparently someone had died or been kicked out of flat, or something, and all his/her stuff, the contents of the whole flat basically, had been emptied out on the street by the landlord. This happens sometimes in every city, right? Especially when the legal protection of the tenants is as weak as it here in Finland currently but let’s not get into politics right now.

Anyhow, when I dropped by in the afternoon to check out what was going on there was a bunch of young and quite entrepreneurial substance-abuser/junkie-type dudes who had already taken control of the pile, sorted all the good stuff away and where selling things to people passing by.

When I came to the scene the main dude, in blue coveralls, was feverishly trying to call someone and to borrow a van to get the stuff away from the street. I need to admit here that I actually ended up negotiating with him a bit and bought a nice Shimano MTB front wheel for 2 Euros for one of my bike projects.

Supporting the local economy. Or something.
Posted by Kriton Music at 3:57 PM

you just got to love these old school Vallila hustlers with their marketing sense. and you got that tire for real cheap too, jussi. were those bikes (pictured on the photo) any good?

The green/yellow rasta fixie bike on the pic is mine, as you know it was originally found from a similar waste bin, though.

The rest of the bike parts there were kinda crap, I think I actually scored the only wheel that was straight/true with all the spokes and shit in it.

There was a pile of MTB tires and one mtb frame but it was the wrong kind, ie. it could not have been converted to a fixed gear bike anyway.

alright. these vallila hoodlums need to step their bicycle hustle game up lil notch, then!