See what I found on a garbage dump today. Fixed Gear Bike Project. 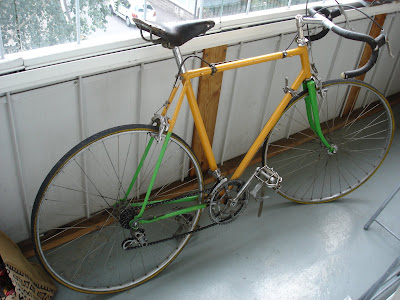 I'm a kind of a person who gets really into something every once in a while and I also love to have all kinds of hobby projects. Well, I recently wrote here about how I got into bicycles again and how I converted my old MTB into a single speed cruiser.

I'm still really into the bicycles and the next logical step after my single speed bike project I had could only be to get a real fixed gear bike, like the kind all bike messengers and hipsters ride. Important part of that game is that you really need to build the bike by yourself, not just to go to a shop with your credit card in your hand and buy a Biachi Pista, Giant Bowery, Raleight Rush Hour or some other fixie that some big bike brands are already churning out from their conveyor belts. No sir, that would be lame.

Interestingly, while I been studying & and getting into the whole fixed gear bike thing, I've found people saying on several discussion forums stuff like: "fixed gear bikes is the new skateboarding...", there are also ex-pro skateboarders making skate video -style movies about riding fixed bikes in San Francisco and Tokyo etc.

Anyhow, now after this over-long intro, here's what happened to day: I was on nice Sunday walk with my girlfriend and our daughter and I just happened to look into a garbage dumpster by a house, like I often do, and now what did I find there?

A cool 1970s vintage steel frame racing bike, with a real leather seat and all. Bit grimy fo'sho but all intact except for the tires. Like whoa, dude! Sure, I took it home and I will convert it into a fixed gear bike ASAP because that's the best thing you can do with those kind of bikes, basically. The actual project with the bike that I'm starting now could be bit complicated but I will keep you posted about the developments. First I need to acquire some things, like new tires, bottom bracket, crank set, chain wheel, chain, pedals, riser handlebar, grips, a track cog and a lockring - just to get my project started...

But wait, there's more. I wanted to know more about the bike but there were no decals or any other markings of any type, only thing I found was that all components had XB3 written on them. After some Googling I found out that the bike was apparently made by Ukrainian Kharkov bike factory, and of course in the Soviet Union. Actually, it was made by one of the only two factories in CCCP making racing bikes, and apparently Kharkov was the better factory out of the two. Nice.
Posted by Kriton Music at 11:13 PM

Dude, that is cool. And I appreciate that you've learned the proper lingo. That's the basics about getting into "gear", you gotta know the technical little words like "bottom bracket".

You know what Hennessy, the bike's bottom bracket has old-style cottered spindle which makes - possibly - getting the cranks off super difficult. Haven't tried to do that yet yet, though.

But yea, yo gotta know the lingo, righ?

And that bike has really cool "ethopian" color scheme