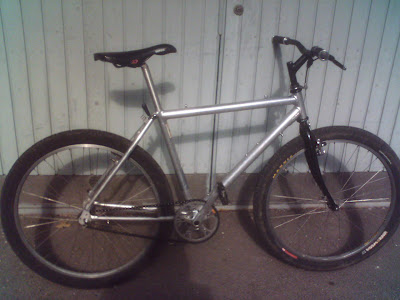 Ok, while we are on the subject of the bikes, look up, there's a v2.0 incarnation from my old mountain bike. Now turned into a single speed urban cruiser, or basically something like a big 26" BMX.

I had abandoned my old MTB some years ago. Originally I bought it in the mid-1990s, it used to be a good bike then, and I drove it hard until the gears, brakes and other parts where all worn out. Then I just left it in parents' garden shed and forgot about it.

However, this summer while on a holiday trip in Copenhagen I saw so many nice bikes around that it made me remember what I once had. I suppose I had also gotten a bit bored with my Jopo, I must admit. You need to have projects, and sometimes you need to be able to ride faster, right?

Now, with my bike project, basically I stripped off everything that I could and fitted a single speed conversion kit in the place of the old gear system. This changes completely the feeling of the bike, to a much nicer direction IMO. It is hard to explain but riding a single speed bike feels somehow more honest when it will only go as fast as you will pedal - and this is exactly why you wanna ride it fast. Also, having only a front brake forces you to really concentrate on your riding...

Finally, to give even nicer touch to my new/old bike, my man Teemu sorted me out with some nice extra fat slick tires, a more modern riser handlebar and a better seat.

All that fixed gear and single speed craze is apparently bit of a trendy thing now, so that makes me, what, a Posenger?

That is nice. But you ain't a true posenger until you start wearing an old skool cycle cap (http://www.selectit.jp/item_wear/img/cap.jpg) and a bike messenger type of a bag (http://www.core77.com/blog/images/lv_bikeMessenger00528_mk.jpg).

Well, I do normally carry a bag which is that messenger style, not exactly, but almost.

But that cap is plain wack. Not for me, no sir!

the bike reminds me of the one that francesco moser used for the 1 hour record:
http://www.federciclismo.it/terza_pagina/storia/biciclette/immagini/bibiclettaMoser.jpg