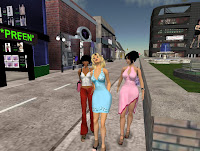 Now it's time to make lists about the year 2007, what was good and what was bad. My first list is short and quite tech.

There has been a lot of hype surrounding this and it feels boring to write about this, but I have to. Let's face it, it's the first web 2.0 service to gain masses here in Finland. It's got over 300.000 users in the Finland network, which means almost half a million finnish users altogether. This was the first online phenomenon that showed how "Tipping Point" really works. It has been cool to classify your friends by being either FB savvy innovators or second wave users and so on.

A lot of hype, a lot of publicity, a lot of stupid applications, but it really proved two things:

- one of the strongest needs of humans is the need for communication
- it's not about the service it's about the people.

More important is that FB has had a permanent effect on us and on how we use online services. FB may die next year, but it's legacy will live on in more restricted social networking applications.

And it's so lame to diss FB. Really. Even if you we're using it 6 months ago :O

I have tried this only once, but what makes it cool is that big companies like Nokia have had to adjust to this cool thingy by bringing touch screens to their models and such. Apple just knows how to make cool looking toys that are nice to use.

"The ultimate virtual life." SL is reported to have like 20 million accounts and many businesses (like IBM) and institutions (like Harvard) and even countries (like Sweden) have presence there. Many people are making a living by selling and designing virtual stuff for Linden dollars which hade made this "world" a real economy.

So what. I don't know anyone who uses SL actively, and I haven't heard of any real good business cases where SL have been used succesfully. A lot of hype, but what is the future of this world? I guess Facebook was the answer to many peeps need for social networking and all this "virtual 3D" stuff was just a lot of hype. I tried SL once and found the interface and user experience irritating. Well see what happens to SL in 2008.

Don't get me started with this one. A great marketing strategy, I'll give them credit for that. Last spring all nerds were fighting for those limited beta accounts (well, with over 1.000.000 users then, it wasn't really that "limited") and this caused an effective buzz. But now the service is open to public, and don't know anyone who really uses is actively. This might me because it's more of an innovative technological platform than a service with any interesting content. And my experience is that the service is still full of bugs (it collapsed today when I tried to use it first time since june...).
Posted by Hennyman at 10:51 AM

yes, iPhone truly rocked my world. it was almost like a religious experience.

facebook is cool and REALLY massive, right now you cant fuck with it.
...but it also really does my head in. i cant be bothered to visit my facebook account, besides checking out the *private* Kriton group for news and updates about our studio times... myspace seems really quite bullshit free right now, compared to facebook...