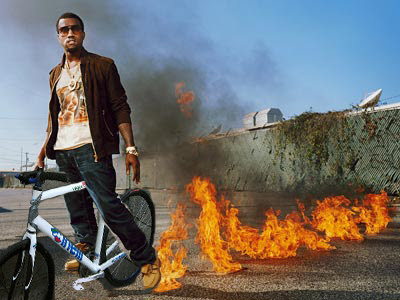 RED ALERT!  This Just in: Teh Fixed Gear Trend has reached the tipping point!
The title of the post pretty much says it all:
Look here: "fyi, i was at trackstar today and kanye west came in and bought a track bike. which track bike u say? u want to know so u can either go out and buy it or giving up track riding all together?"
And a lil' bit more here.
"So, my sources have told me that not only did Kanye West roll through Trackstar yesterday, but he is getting a "blinged" out Vigorelli and the guys from DQM taught him how to skid."
And for Trackstar NYC, click here.
Oh, here's another fine photo of Kanye flying oh so high on his limited edition Vigorelli track bike... 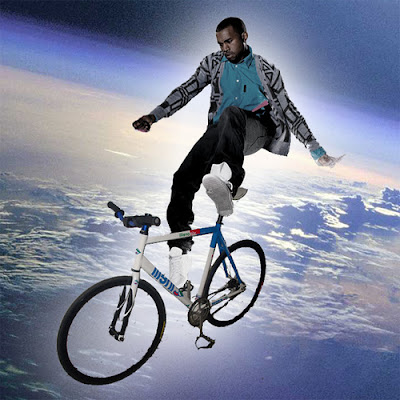 Yeah, like to see Kanyevel ride this thingy...oh this so hip rite now.

nice u added that second photo too! Kanye flies like an eagle!

but this actually reminds me of the last bicycle craze (that i, being an old ass dude, raised in the 80's) can remember: the BMX's!

For a couple of years in the early to mid-eighties you could not see a movie, comic book, music video, any product of popular culture - without some sort of a reference to BMX bikes. This WILL happen again.

Kanyeezy is hip enough to know hip shit. While it still is hip (for a minute).

That fixie thang is hitting the mainstream quickly - want it or not. i'm sure some of the more stiff lipped hipsters are gonna have a hard time accepting that their neighborhood junior high kids are riding dem things come next summer (in the worst case: possibly made by Nopsa...)

until he drops the blinged out whips with 24's and lcd's up the ass he doesn;t have my respect. wehn he does, he;s one of us.