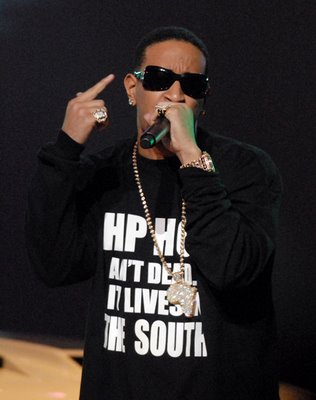 Last nite I watched BET Hip Hop awards, which is like the Oscars for hip hop: a lot of great artists, no real surprises and a lot of bullshit said on stage.

But they were all there, and all the biggest anthems got played. The hottest moments were in my opinion (not particulary in this order):

1) Luda's performance as a response to Nas. Quite satirical, humorous. Read the T-Shirt. It's a powerful media.

2) Game's performance of "One Blood" that ended in a boring speech about beefs. That he respects Jigga and Fitty. Yadada. Even Jay-Z himself fell asleep during these words.

3) Busta's speech after receiving the "best live perfomer" award or something like that. He pretty straightforwardly dissed a lot of these new cats who just stand on the stage holding their groins.

4) Almost all artists had hoodies with shiny blingy things on them. What's up wit that? Rappers shop nowadays at H&M's?

5) Lil Wayne was really hyped and jumped around a lot, even after his set

6) Dipset soooo ain't about singing. Jim Jones couln't find a note if he ran over it on a H3

7) Chamillionaire seemed like really a humble guy, a bit lost on the stage.

hennessy, duude i'm so jealous of your MTVBase. i wanna watch that ish too! just hoping your VCR works...

and i really agree with you about Jim Jones' singing. it's so bad that it's actually almost good...