SMASH ASEM: Riot in Helsinki, or was it really? 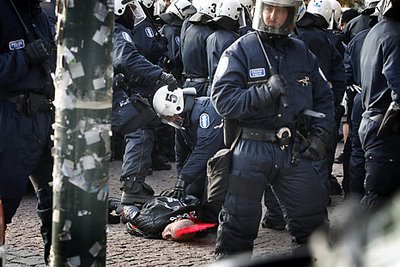 Time for some politics again.

The "Smash Asem" demonstration began peacefully at around 6 p.m., but was unable to move on from the gathering point in the square in front of Kiasma by the arrival of around 200 riot police equipped with shields, helmets, and truncheons.

Not merely the 300 or so demonstrators were hemmed in, but also passers-by on their way home, journalists and cameramen, and people who had turned up out of curiosity to see what was happening, and whether the demonstrators would make good on their website pledge to "bring at least a bit of disorder to the streets of Helsinki".

There were a further several hundred police officers behind the inner ring, as well as five Helsinki City Transport buses arranged as a wall.

In all 136 people including two members of Helsinki City Council were arrested and kept in custody over night for questioning. Five people, none of which were police officers, were injured.

The police prohibited people from using their constitutional right of demonstrating in a public space, right to gather and the right to free speech. During the demonstration some police officers also apparently threatened Mr. Ilkka Tapale, a social-democrat member of parliament by telling him that they could arrest him too (note: according to the Finnish law they cannot do this). Police and Finnish BOrder & Customs officers were filming the demonstrators and and passers-by for their own records. Names and IDs of both demonstrators and people watching the incidents were recorded before they were allowed to leave the place. Police officers hid their name and ID badges.

Finland is a democratic society that prides itself as an example of a democracy, egalitarianism, all encopassing welfare state, transparency of administration and so on and so on.

I agree, the freedom of speech is one of those things that shouldn't be tampered with.

But with freedom comes responsibility, and that's why I never really could understand anarchism. I mean, "theoretical anarchism" at the philosophical and abstract level is worth discussing and has some really great intellectual insights but "street level anarchism" (as in "bringing disorder to the steets") is so often just stupid... at least in our scandinavian framework. And anarchism is not equivalent for demonstrations, I think that in some cases demonstrations can be a powerful tool to affect the public opinion and to gain media attention.

I wasn't at the demo, so I'm not sure what actually happened there, but in the light of recent events I can easily understand why there were so many coppers to protect the common and private property.

I hope I'm not sounding too conservative or anything, don't get me wrong - I think that if the police denied the right to speech, they must be sanctioned accordingly.

I just am not a fan of "street level" anarchism. It's just happens that most of the demonstrators usually either don't understand or care why they're rioting, they just like the act itself. This is quite understandable, but you don't have to tolerate everything you understand.

Of course I don’t condone violence from anyone either but somehow I feel that the excessive force and measures that the police was apparently using against anyone (including passers-by, observers, members of media and even politicians) who happened to be in the area in Saturday afternoon were completely unacceptable.

Somehow I feel that the police as the user of state-legitimated violence, should have higher standards (in moral sense as well as in practical sense) in the way they use their power than a couple of mostly drunken punks, dreadlocked eco-hippies and teenage girls.

I actually read the manifesto of the Smash ASEM demonstrators and it all made perfect sense to, except that little part in the end about bringing a little bit of havoc on the streets of Helsinki. Of course mainstream media only picked up this part. Yet after all, this was the only thing the demonstrators accomplished, with the help of Finnish police.

Another point is that the for those very few people who are willing to use violence and want to riot whether they are anarchists or whatever, the excessive force and measures used by the police only works as legitimating their violence and rioting. Also, the police can and will use this imaginary “threat to public security” that they are partly causing with their own actions in order to get more resources from the government. So after these incidents we can only expect there to be more of the same stuff on the streets of Helsinki.

Now it basically seems that the police seem to think that they can get away with anything just because they are preserving the public order. Who really thinks that about 50 so-called ‘anarchists’ are a major threat to the existence of the Finnish society and political system?

Good points indeed, but I have to say there is one thing is your post that calls for further discussion:

"...the excessive force and measures used by the police only works as legitimating their violence and rioting."

That is probably true for some parts, but it also sends a message that rioting will not be tolerated by the state. The idea to this viewpoint came from Gladwell's Tipping Point (a good book on social epidemics) which has one chapter dedicated to the Zero Tolerance politics/policies in NYC during Guiliani and the classic Broken Window-theory.

Gladwell quite convincingly proves that in some cases zero tolerance can be quite effective to prevent the more "common" people from turning into a life of crime. Hence zero tolerance towards violent riots means that the main rioters will be a smaller group, because the fear of the police effectively prevents the not-so-activists (more common people) from getting involved. The fear of police of course has no effect on real criminals or hard core riot fans.

This is an interesting debate here, and I'm not saying that Zero Tolerance is the answer in this case.

I think the real problem is in the part of the system that controls the police force , not the officers themselves (like in the 90's L.A. where the officers themselves were selfish and racist pigs like N.W.A. enlightened us). The power structures are complicated and it's also harder to point out which part is are "rotten", or do the power structures just reproduce the ideologies of the whole state.

What do you think of this?

... Today I went to hear the results from the research on contemporary youth culture "Atomized Generation" (By Mikko Salasuo / City Of Helsinki, Urban Facts). There was one interesting theme in his research that intetwines with our debate:

Mr. Salasuo spoke of "spectacle" society or "phenomenon" society as a way to describe the changing character of youth cultures of today. Kids can be temporarily and easily involved in social groups based on a big phenomenon (like SmashAsem e.g. in my opinion), but they don't build their identity around those groups and they can just as easily leave from the group. So basically a lot of kids could get into rioting today and do something else tomorrow, if they feel motivated enough. And I think that those "common" kids are the ones we as the society or state should set the limits to.

Here is the most difficult part- how should this be done? It's a fine line between zero tolerance policies by the police and overuse of police power.