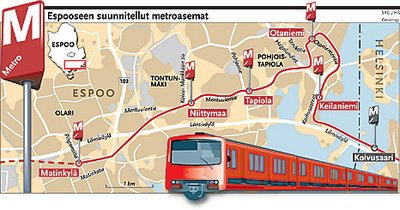 Dear Metro,
I would like to warmly welcome you, the extension of the Helsinki’s one and only subway line, to the wonderful City of Espoo.

As you indeed already know, many of us have been waiting for you since the 1980s, even if the local decision-makers in the city government, most of them from more or less politically conservative and right-leaning, have not taken much heed to the wishes of the citizens.

We are very happy that you have finally decided to come and to bring means of relatively economic and in long-term definitely environmentally much more sustainable mass-transit for the people living in Espoo. Even, if it will still take anywhere between 7-15 years before the trains actually start running.

Nevermind the fact that many of us do not even live in Espoo anymore. And let's just forget about the fact that some of us have indeed moved away to Helsinki and decided to stay there, probably completely unrelated to the metro-issue.

Ok, maybe my so-called 'Open Letter'/rant needs so explanation, maybe not. Anyhow, it's cool that City Of Espoo, the "Los Angeles of Finland" finally decides allow the subway to be built there. The goverment will pay for 30% of it and all. I have been waiting this for 20 years already but the nice people in power in Espoo always resisted for no reason at all and drove their cars to Helsinki every day all day (where most of them work anyway) causing air pollution and traffic congestion. During all these years some of the arguments against the subway bordering on propaganda have gone along the lines (in worst cases) like "if we build a metro line to Espoo from Helsinki, then all the poor unemployed alcoholic white trash from eastern Helsinki will flow to Espoo and bring all their social problems along...". Yeah, right.

But now those people have finally lost the game.
Posted by Kriton Music at 4:16 PM

yes, i must truly say that i'm happy about this finally happening. not that it will make me go to Espoo any more often than i already do...

Or, as the old saying goes, "once an Espoo-lander, never an Espoo-lander again". i dont have anything against the city, except that it's just veeeery boooring.

The best part of this is that the Metro's gonna go just tru Lauttasaari (aka Staten island) where I live. The real estate prices will rocket sky high. And It will be a fast route to the city (of Helsinki) for me, I'll get the SUV if I need to go to LA.