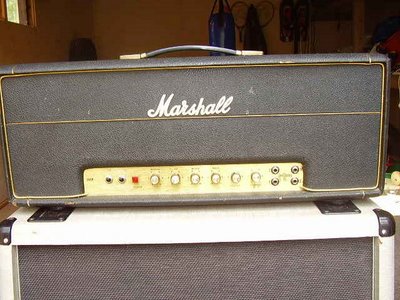 To all you Rock*n*Roll Fiends out there, check this out. It is a Marshall JMP bass tube amp from 1973 for sale on Finnish Huuto.Net auction site, but what’s special here is that the seller claims that it was previously owned by Nasty Suicide from the Legendary Hanoi Rocks.

What more need I say about this? If it really is Nasse’s old amp, it is a piece of Finnish Rock’n’Roll history and at least so far it is not that expensive either. Those old tube Marshall amps change hands for
big money these days anyway if you check out Ebay. Damn, if I had more money I would invest on that and sell it later to a Japanese collector for crazy money.

After the original Hanoi Rocks line up broke up Nasty played with Johnny Thunders, had couple of bands (Cherry Bombs, Demolition 23 most notably) and then quit rock’n’roll and returned to Finland to complete high school. Later he got into university and graduated with a provisor’s diploma in Dept. of Pharmacology at the University of Helsinki. But you know, apparently he did have some knowledge of different chemicals and substances prior to that - from The Rock'n'Roll University.
Posted by Kriton Music at 3:42 PM

Should we get this to our studio? I would like to play some licks and riffs thru this baby.

Hell yeah we should!

Another thing is that if you or we or anyone buys that thing, you gonna need a muthaf**king stadium in which to play that. Those amps are LOUD!

I wanna strum my licks throo that monster! That would mos def raise The Kriton Studio to the NEXT LEVEL!