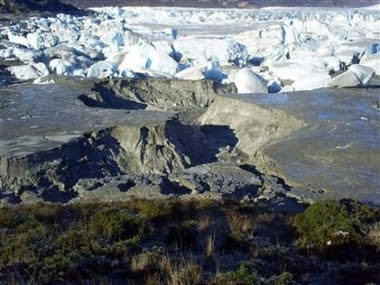 How scary is this?

"SANTIAGO (Reuters) - A lake in southern Chile has mysteriously disappeared, prompting speculation the ground has simply opened up and swallowed it whole. The lake was situated in the Magallanes region in Patagonia and was fed by water, mostly from melting glaciers. It had a surface area of between 4 and 5 hectares (10-12 acres) -- about the size of 10 soccer pitches.

"In March we patrolled the area and everything was normal ... we went again in May and to our surprise we found the lake had completely disappeared," said Juan Jose Romero, regional director of Chile's National Forestry Corporation CONAF.

"The only things left were chunks of ice on the dry lake-bed and an enormous fissure," he told Reuters.

CONAF is investigating the disappearance.

One theory is that the area was hit by an earth tremor that opened a crack in the ground which acted like a drain. Southern Chile has been shaken by thousands of minor earth tremors this year."
Posted by Kriton Music at 12:44 AM

I just started to wonder, wheather the lake re-appears somewhere else on this planet. Is it traveling underground to a new location?

or maybe the lake wants to to go mormon and join forces with Salt Lake?

Now I know what happened. I watched the tv series "Surface" last night and they had a similar problem. It seems that in the core of the earth there are living some ancient creatures and they dig tunnels or something like that. All the water has obviously gone through one of these tunnels into the hot lava underground and vaporized.

... if i didn't know you had been watching that show, i would say you've been smokin some keko last night. that ish was on some x-files level, man!

"I was just thirsty, man"