Let the Afro go and rock a Caesar 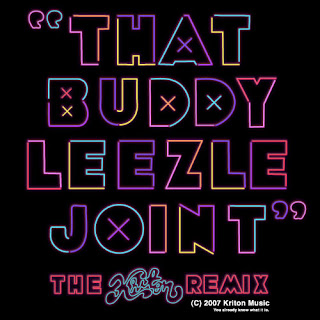 Ladies and gentlemen, it is finally the time for da Kritons to go international. And we went straight to The Bay Area, where else!

I know, we have blogged about this earlier too, when it was still under construction. But now that it's ready and released, we have to give a special advertisement blog entry about our brand new track, "That Buddy Leezle Joint", or "The Arrival", as Buddy Leezle himself calls it.

It is a remix for Buddy Leezle, a mega talented MC from San Francisco, USA. He is also a part of the group 215: The Freshest Kids, and some other bands too. I dunno if you should really call it it a remix or an original track, since none of us have actually heard the original version. But it's safe to say, that our version blows the f***in roof off yer building. Try it, homie. But don't say we didn't warn ya!

It's gonna be featured on Leezle's new mixtape-album "Hipster Jesus" (probably the best album title in long while!) and you can of course hear it on our myspace site as well as Leezle's.

OR if you are really in need of this track, you just might be able to download it from here, at least for a while...

And as they so often say in heavy metal record covers: play that sucker loud.
Posted by Fiil Inc at 8:35 PM