You finally know you are starting to get old when: 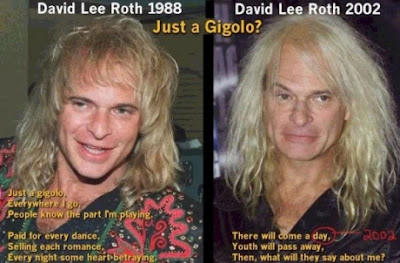 You finally know you are starting to get old when:

1.) Diamond Dave, who’s had his share of trials & tribulations during his career for sure, is going to back together with Van Halen for summer of 40 concerts. After 20 years of being on a solo career. I always reallyreallyreally hated Sammy Hagar so that’s cool in a way, but there’s more:

That strangely your-dad-like-looking-beardy-wierdy Michael Anthony is not playing bass in VH anymore but instead Eddie Van Halen’s 15-year old son Wolfgang will be on the bass. ‘Scuse me? And wasn’t Wolfgang actually also the name of Eddie’s guitar somewhere along the way? I am too disgusted to look that up now but who cares.

2.) I am not sure if this is even worse or not but apparently Zack de la Rocha is going back together with Rage Against The Machine for some gigs, or at least for the Coachella festival.

Audioslave sucked from beginning so it’s good if that stops them from existing but didn’t Zach leave RATM for some hard-core political agenda against commercial everything etc.? So what’s up with he joining them again? You ran out of money (and your political agenda) or what, dude?

Apparently Audioslave broke up today, February 16th! Hooray! But wait, does this mean that Soundgarden will reunite?

Dude, Dave sure looks really old. I guess the 80's overuse of cocaine kept him together, but the endless boozing since the 90's has finally got to him. Or vice versa, maybe it's the wrong drugs he's taking nowadays. I'd get a new doctor to get a new set of daily pills if I were Davey.

I wonder if he still can do a split? He used to be really good at gymnastics and he loved to show that off on stage as well.

yeaa, wasn't VH supposed to make a comeback with Diamond Dave, like, 15 years ago already. well, i'm still kinda happy theyre doing it now. at least it's 1000 times cooler than hooking up with the fucking singer from Extreme.

yes, Van Halen was the ULTIMATE Hollywood rock group and one of the best american bands ever. still, they shoul've split in 1985 and gone to write biographies, take drugs and screw hookers instead of makin crap albums since.

and for the RATM issue, i have nothing to say, except that they sucked from day one already. i mean, what could go wrong now, even if theyre middleage.

oh, wasnt dave lee roth suposed to be an ambulance dude or whatever? am i wrong?

On the RATM-issue I must say that I actually digged their 1st album. It was partly because I was into Inside Out, Zack's cool hardcore band before RATM and partly due to Tom Morello's innovative touch on his axe. I mean, the dude invented "scratching" on guitar... But then all european semi-conscious leftist "wanna-worry-about-globalism-and-save-the-poor-friggin-injuns"-kids took RATM as a voide of their generation. Finally Tom's riffs kept repeating themselves and I couldn't just stand that anticapitalist message from these kids in america. I'd rather listen to antibabylonian chants in the form of reggae, which has roots in real problems.

Yea, i admit that the first album had its charm when it first came out. But that wore out in, like, 2 weeks. i never got into the lyrics thing (maybe because i don't really care that much about lyrics anyway). theyre a bunch of spoilt (middleage) brats who cant seem to decide whether they wanna do whiny rock or whiny rap.