Power To The Book 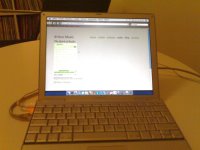 Heeeeeeeeeee're it iiiiiizzzzzzzzz folks! The Kriton Posse is now finally PC-free when it comes to music making hardware. I used to be the missing link, but as of last nite I am so totally powerbookin' til doomsday, that it hertz. Ok, the new Macbooks are cool looking, but this is a tried&tested true solid warrior in its' shiny silver armour.

Here's the funniest vid I've seen in a long time. In the video you can see a taxidriver on BBC commenting on the Apple vs. Apple case. That itself is not funny, but the man is there by mistake - the reporter thinks that she's talking to Guy Kewney, the founder of Newswireless.net. Even the big media makes mistakes! This shait is really hilarious...
Posted by Hennyman at 8:49 AM

dude, you're the daddy of the Mac-daddy! We makin' Steve Jobs feel very good!

That's a funny video, it's sooooo out there.

Y'all might know this by now, but the guy in the interview was called also called Guy (Guy Goma v.s Guy Kewney) -not a taxidriver as they thought at first, but a guy applying for a job at the BBC. I think he deserves a chance workin' there, whaddaya'all think?