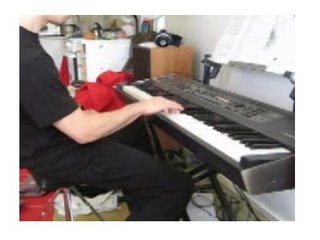 This hilarious DIY video proves that people should stop playing with themselves and get a social life. Fiddlin' alone with your instrument used to be a common trend in the 80's. Then all teenager-wannabe-guitarhero-metalheads had to practise hour after hour to master tricky and fast guitar licks in their bedrooms to achieve a certain level on professionalism, that was needed in the demanding genre of metal. From that evolved bedroom DJ's and other lonesome instrumentalists of other genres.

That's was ok way back, because that was the 80's when people also drove big speed boats and got introduced to bunch of new things such as crack, dancehall reggae and Nintendos. Some of these new things were cool, some of these were not so cool.

But after this video I realized that, OH MY GOD, it is 2006 and there must be heards of metal keyboardist who also "jam" and "get wild & wacky" and "improvise" alone at home. This is a very sad world. Didn't we learn anything the 80's, or 90's grunge ? Why didn't metal go away like puffy hairdo's and reaganism like it should have?

(ok, after writing this, I did sum detective work and found out that this dude in the video is a member of "Runeland:A Power Metal Saga". This means that he's ok, he's got a life. Let this be a warning to all those stars-to-be: get in touch with real people and start a band. That's it.)
Posted by Hennyman at 1:08 PM

Hennessy, I will give you a reward: THIS IS BY FAR THE BEST FUCKIN' POST IN OUR BLOG! I would even say LOL, ROTFLOL or OMFG - if i knew what they meant! Dude you rule.

Well, after seeing Lordi taking over Europe by storm I must say that metal (or rock/theatre) seems to rule. Big up finnish rockers!

"Well, after seeing Lordi taking over Europe by storm I must say that metal (or rock/theatre) seems to rule."

"Now it's just pop music just like any pop music."

>>exactly what I mean. And I really must emphasize this - this is only a good thing! Big up Lordi, big up finnish pop(-metal), dudes you rule!

This is an interesting discussion u guz have goin on here. Hmm.. Does metal really rule?