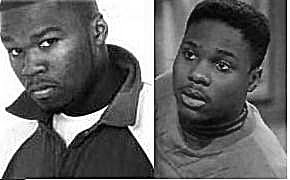 Arribody knows the Cosby Show, and most of kids today know Curtis Jackson, aka 50 cent. But what suprised me, was the indisputable resemblance between the Cosby actor Malcolm-Jamal Warner and Fifty. Last night I watched 50's film "Get Rich Or Die Trying" and couldn't just stop wondering if these two could actually be the same person. Could they? Why not? Let's think about it: the meek and shy smile, the quiet voice, those bedroom eyes, way they pose to the camera... There is no doubt, mon!

Ok, Malcolm-Jamal (cool name there btw) must be a bit older than Curtis, but you know what they can do with make-up and modern computer technology. What you see in the cinema is a representation of life, not life itself. Don't be fooled and misled by the mass media, children!

This is a cool career move for Theo/Jamal, who was commonly considerer as the nice guy, not a gangsta. For those who still have doubts: have you actually seen Jamal in like 15 years? Maybe he's nowadays really covered in ink, pumped up and been shot and stabbed few times. I mean not to diss 50, he's proved that he has made it, but we must recognize the true talent of Jamal!
Posted by Hennyman at 10:40 AM

Theo huxatble dude! That takes back...
Anyone seen "Cockroach" around, though? I wonder what happened to him. Is he signing with G Unit too?

Hennessy beware! After an entry like that I am sure that Theo/Fitty & whole Huxtable-posse is onto you and is gonna show up anytime soon in Lauttasaari in their ten Escalades and put a cap or dozen in yo'motherf**kin' punk ass!

Or I will silently be "removed" by some cia-looking guys in dark suits from Shady/Aftermath/G-Unit/Interscope Records/Films, because I have revealed the biggest scam in the entertainment business since Milli Vanilli.