The Recreational Drug of Choice in Helsinki: Khat ??? 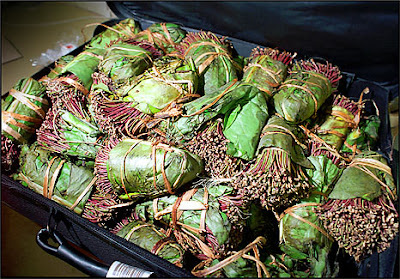 If you look at the title box of of this blog up above, we promise to bring you news from the HKI underground. Well, here's something you should be hip to right about now:
Apparently Khat, the mildly amphetamite-like stimulant, has finally landed up here up in the north, as introduced and used mainly by part of the local Somali-community. The proof of this is the fact even the Finnish cops and the customs officers are now hip to this new threat to our society and, quite surprisingly they've even actually managed to catch some smugglers.
Someone, who was busted, got 3 years and 6 months jail-time after admitting having organized smuggling of some 4200 kgs (or probably way more than that) into Finland ... from UK, where Khat is not even illegal, actually.
Well done boys, you've earned your meagre salaries. Now go home and drink that friday bottle of vodka and feel good about yourself, you've succeeded in getting some of them DEADLY DRUGZ of the streets. World is better and safer place again.
No, but seriously now:
if the common knowledge is that the Police and Customs (and they admit this themselves!) manage to confiscate approximately only less that 10% of all illegal drugs smuggled into the country, what does this mean?
Then last year at very least 40 000 kilos of Khat was consumed in Finland. Hmmmm....
Posted by Jussi at 5:26 PM

where can i get some?