Digital Dan, the coolest guy ever 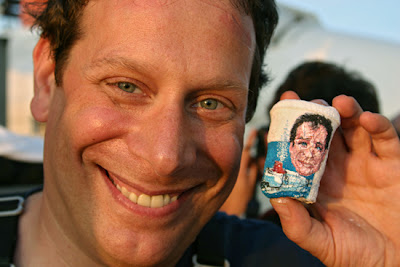 Last week I attended SIME-conference in Stocholm and one of the speakers was Dan Dubno, AKA Digital Dan . I didn't know of this guy, he's a former CBS News reporter who specialized in new gagdets and techie-stuff. He no longer works for CBS, but you can view some clips of Gizmorama here.

Anyways, this guy is the coolest dude ever. First of all he announced that his favourite hobby is blowing up things (!) and that he once set a lake on fire. And he then showed his t-shirt, that had a build in applause-o-meter that showed the audience reactions in classic VU-meter style. On the front of his t-shirt!!! How interactive and cool ist that??!!!! And among many things he introduced

This guy is the gizmo-god. I pay muchos respect to him.
Posted by Hennyman at 10:37 AM

btw, that dude looks like Knopp in that pic, doesn't he? without the long hair though...