Gwar, what is it good for? 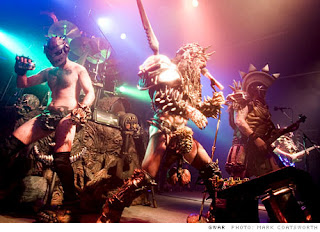 Yuh know , in the time of web 2.0 hype it’s so humorous that every week there seems to come more and more new ridicilously named websites and services, like tubeflocks, wikibee, roomle or googster (these names were actually made up by using an web 2.0 name generator .
Most of these r rubbish obviously, but Joost seems quite promising. Ok it’s really hyped, but once they get it up and running for good and get some quality content, it’s gonna be a bomb.

I’ve been using the service for a few weeks now, and although it’s really bugged, it’s got a lot of potential. Last good kicks I got out of watching this Scottish hat wearing Canadian interviewer "Nardwuar" interviewing Gwar. I had totally forgotten the existence of this band, they really rock. I mean Lordi is like a wimp Swedish cousin of this band. I hope that when the Eurovision song contest hype starts to spread next week, we all remember that Gwar is the real thing, Lordi is the diet version. Look at the picture above and you’ll see it for yourself…
Posted by Hennyman at 10:31 PM

I totally agree.. i get so bloody sick of these rubbish sites and when i just wanna watch tv or something online its so hard to find a site thats actually good. I did stumble upon a gem however, its www.viewmy.tv theyve got heaps of channels.. most that you cant get on normal tv. check it out, i think its awesome.