This is how I spent my Friday afternoon 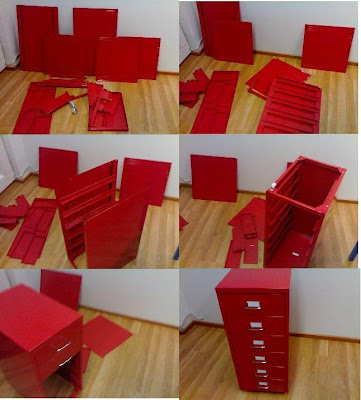 Being a white collar salaryman during daytime it is a nice to have changes in the daily routines. Today my highlight was the assembling of some nice Ikea furniture to store my office supplies in. So, some real men’s work for change.

I had a strict goal: my colleagues had done this in a hour, so I had to beat them or at least be as fast as them. I have assembled a lot of Ikea stuff in my time, some my own and some of friends. And I have always hated it. I mean, you don’t actually need tools, which a so cool to use, especially power tools. And the material is often so weak that if you don’t read the instructions (RTFM!) you will bend and break some parts, that’s fi jeezy.

So here is a short photo collage of the process, it took me exactly 59 minutes, so I beat the 1 hour limit. I guess now I’ve earned that Cobra beer I had during the lunch.
Posted by Hennyman at 4:21 PM

That thing is very red.

I remember them days when i still had a 9-5 job, the company had to move twice a year. so it was a ikea construction party every six moths or so.

damn, all that screw screwing makes your palms hurt. if you don't have an electrical screwdriver gadget. we didnt, back in the day none of us were such manly og's.

mind you, i should get meself one of those from clas ohlsson. the ultimate fantasy come true store for us manly bob the builders.