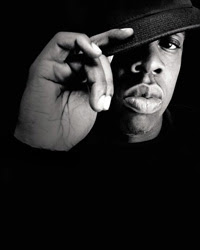 In deed he is. The CEO of hip hop, mr Carter, is known for his large variety of businesses. He's obviously the co-founder of the Rock-A-Fella empire and part owner of the NBA's New Jersey Nets and Armadale Vodka, co-brand director of Budweiser / Anheuser-Busch to name a few. Lately he's been the spokesman for Hewlett-Packard notebook computers and Yukon Denali SUV by GM.

To top this all, he has now made a deal with Coke to re-design the new cherry coke can with his Rocawear posse. And much like the Bud Select ads, a Jay-Z song will serve as the soundtrack for this sweet sweet cherry treat.

So he is a business in deed, but when will he cross the line when this all seems ridicilous? I mean, owning businesses and making business is another story, but being a mannequin may not seem so cool after seeing one's face all around on ordinary products and ad campaigns.

And Jigga's effect may already be wearing out - even with his influence late in the year, Bud Select's shipments were down about 8% last year
Posted by Hennyman at 5:05 PM

things that make me go hmmmm... i say: don't go that road Jigga. you cant just friggin sell your cool to 20 different companies and products and expect it to still stay with you.

at least Jeezy's mixing Arm & Hammer with his coke, not designing cans to it. back to the street, Jiggaman.