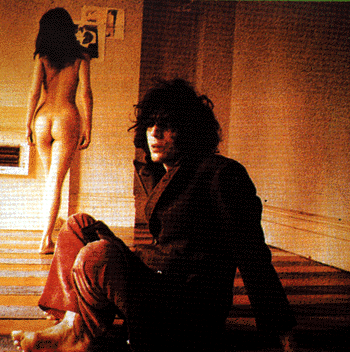 One more great guy is gone as legendary Syd Barrett died last friday at the age of 60. Although there’s been rumors about Barrett’s death (as well as he being in jail or turned into a vegetable due to excessive LSD intake) since late 1960s when he left Pink Floyd, this time it seems that he is gone for real. The psychedelic weirdness of his persona and complete disappearance from the media over 35 years ago only fed the rumors. Click this for a fascinating article about him from the Rolling Stone Magazine in December 1971.

I was in Amsterdam last friday and I am already starting to regret that I didn’t visit the Pink Floyd themed Umma Gumma Coffeeshop while there. Anyhow, IMO he was the only real cool guy of Pink Floyd and they only went downhill after he left them.

Here’s some essential info on the man:
Barrett co-founded Pink Floyd in 1965 and wrote many of the band's early songs. The group's jazz-infused rock and drug-laced, multimedia "happenings" made them darlings of the London psychedelic scene. The classic "The Piper at the Gates of Dawn" album (1967) was largely written by Barrett. He played lead guitar in the band. However, Barrett suffered from mental instability, exacerbated by his use of LSD. He left the group in 1968 to be replaced by boring David Gilmour.

Barrett released two solo albums "The Madcap Laughs" and "Barrett" but he soon withdrew from the music business altogether. An album of previously unreleased material, "Opel," was issued in 1988.

He reverted to his real name, Roger Barrett, and spent much of the rest of his life living quietly in his hometown of Cambridge, England. Moving into his mother's suburban house, he passed the time painting and tending the garden. He was a familiar figure to neighbors, often seen cycling or walking to the corner store, but rarely spoke to the fans and journalists who sought him out over the years.
Posted by Kriton Music at 3:52 PM

yes indeed, Syd was the main man and he will be truly missed. Although he hasn't really been here for the past 30 + years (and that's all my life). But as the cliche sez, the music will remain (and the song remains the same > laulu jää pystyyn). So: go cop the first Floyd albums and the Barrett solo stuff, kick back and enjoy that ish. Before i really start sounding like my father (or someone his age).

Dude, I just realized that we must be really getting old 'cos we keep on blogging on about some dead guys who used to be great before we even were born. This is truly depressing.

Hallo I absolutely adore your site. You have beautiful graphics I have ever seen.
»