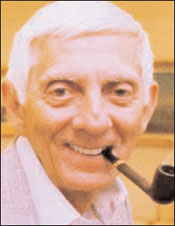 Mid-Summer weekend, or ‘Juhannus’ in Finnish, is big party in Finland with some very particular things about it. A large part of population retreat to their summer cottages to barbeque some sausages, sit in a hot sauna and to swim in a lake, build and burn a huge bonfire and of course to drink more or less heavily. Consequently many people always lose their lives during the festivities, which is a truly sad thing. This year seven people drowned and at least four others died for different reasons.

However, let’s forget about those people for a moment and pay our respects one very special guy who passed away during the weekend. A man, who has given all of us so much mind-numbing entertainment and fun during last thirty years or so; The Über-TV-Producer, King of Soap Operas, Mr. Aaron Spelling.

Aaron Spelling passed away at the ripe age of 83 years in his home in Beverly Hills (90210, where else?) on Friday 23rd of June. Mr. Spelling has produced all the TV-series we have watched and loved: Love Boat, Starsky & Hutch, Dynasty, Charlie’s Angels, Hart to Hart, T. J. Hooker, Beverly Hills 90210, Melrose Place, Twin Peaks, Charmed, Summerland and countless others during his long career. And of course he gave us his lovely, albeit rather surgically enchanced, daughter Tori Spelling too.

Watching those series, like I did watch BH 90210, Melrose Place and Twin Peaks (The Best TV-series of all time!), really must have had some kind of an effect on me when I was teenager, or at least on the image of American society that was forming in my mind. You just can't forget that classic episode where Brandon goes to Alcoholics Anonymoys after crashing his car while drunk driving, ...after drinking 2 beers.

Anyway, according to Guinness Book of World Records he is the most ‘productive’ TV-producer of all times as he has created more than 5000 hours of top quality soap operas for TV as well 300 hours of TV-films and about a dozen of movies for silver screen. Of course he made a lot money too, Forbes Magazine estimates that Spelling’s fortune is worth more than 300 million dollars.

And finally, Aaron Spelling’s life was also a real American Dream come true. He was born in a poor Jewish immigrant family in Texas in 1923 with Russian father and polish mother. First he tried to make it as an actor, without much success, but turned quickly into a producing - and the rest is history.

I was just about to blog this piece of news, but U made it first...

A sad day in tv-land in deed.

Yea, Tori Spelling will sadly be unemployed from now mon. not to forget Aaron's even lesser known son, Randy Spelling... (who starred in most of his dad's shows during the 90's)

Very best site. Keep working. Will return in the near future.
»