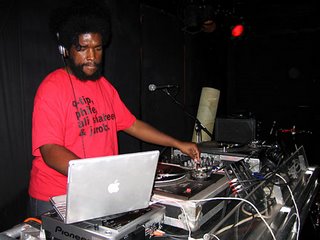 Last saturday I had the pleasure of meeting Ahmir "?uestlove" Thompson from The Roots, when he stopped by in Helsinki to play a dj gig.

I know ?uest is a huge friggin icon for many of you jazzy hippie nu-soul type cats (the type of people who actually might use the term "cat" when referring to a male). And although The Roots is not always exactly my cup of tea (still, the new album is mad NICE!) still I must admit that ?uest is an incredibly talented and prolific musician and producer. All that blah blah yada yada, we all know that stuff. Musically, the man is near genius.

But the big news here is... This dude was one of the friendliest, nicest, sincerest and most outspoken people ive met in the music bizness. No ego trippin, no putting other artists down, no ass-kissin, no dissing, no pre-written biography answers type bullcrap. The guy was actually making conversation

People say that his dj gig wasn't maybe the hottest thing since sliced pizza (i didn't go since it was too late, too Kallio and i was too beat). But even if it had been crazy wicked, i wouldn't even regret not going. The interview was just enough for me. ?uest confivinced me that musos can be decent humans too. Which sometimes seems to escape me.

And also: he was one of the biggest dudes I've seen in all my life. I mean XXXXXL-large.
Posted by Kriton Music at 12:11 AM

btw: i heard also the most compelling analysis of the Borat movie from ?uestlove... he really loves it.

Check thiis quote from the questiomark-man himself:
"i’ve seen Borat three times and not just for the comedy element. That is to me one of the greatest examples of social studies that i've seen on film. The fact that he disguised that in comedy is great, but the fact that he really got to show red state america’s ugly side. The greatest thing on tape since the Rodney King beatings from 1991. Cos he got people to let their guard down and now everyone's trying to sue ”im not a racist, im not a racist”."

Ain't seen the Borat movie yet, but I must say I'm a big fan of Borat. And I dig the new Roots album as well.