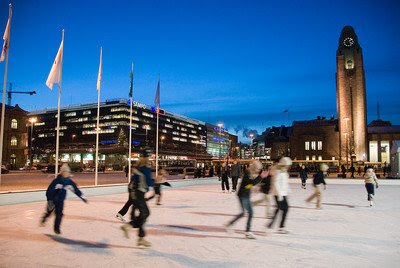 On saturday 28.3 the Kriton Boys will be spinning discs at the Jääpuisto That's gonna be literally a cool happening, 'cos the place is an ice rink , a bit like the Rockefeller Center in NYC.

Wikipedia tells us that "An ice rink is a frozen body of water where people can ice skate or play winter sports. Some of its uses include playing ice hockey, figure skating exhibitions and contests, and ice shows".

We hope that there won't be too much ice hockey going on as we start playing them records, 'cos we don't have no "we will rock you" or any other sport event standards in our vinyl bags.

It's gonna be an early start, we'll be there from 4pm to 6 pm, and we're gonna focus a lot on easy going reggae, and maybe some smooth hip hop sounds. A good way to start the evening before you head out to the Tres Bien-club later on.

Ya man, this is gonna be MAASSSSIIIIIVE!!

But somehow the combination of reggae and ice-skating brings the movie "Cool Runnings" to my mind (although that movie was about a jamaican dudes on sleighs)... is that cool? Of course it is!!!

Looks like it's gonna snow, but wait until we bring out Shabba Ranks and Burro Banton!