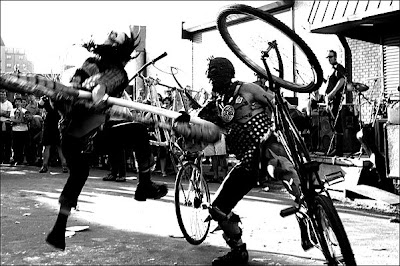 I'll be spending two weeks at the end of this month in San Francisco (yeah, not "Frisco" as you should know). I'm quite hyped about the trip because it's the spot where mountain biking was born (Marin County big up), and the bay area has always been interesting musically from the dreadful hippie times to the trash metal (Death Angel big up) scene, berkeley punkxx (Green Day big up)and modern hyphy movement (E-40 big up) and of course it's the the home town of our cool buddy, Buddy Leezle. And not to forget that Journey was a local group as well, and they also dedicated the song "Lights" to the foggy city.

And I also realized that I'll be there on the last friday of April. You know whut that means? I'll try to attend or at least witness the Critical Mass in the very spot where it all started. Yeah, that means lots of cyclists and cycle-enthusiasists will once again be reclaiming the streets. Well, I'm not sure if that all so positive, because it gets really violent sometimes, like when annoyed car drivers start attacking the cyclists, who strike back with their u-locks and such.But it's for a good cause. Like Jzzi just said before, we're all treehuggers here.
Posted by Hennyman at 1:58 PM

good, i just added even more some other new emo backgrounds at my blog
http://www.emo-backgrounds.info