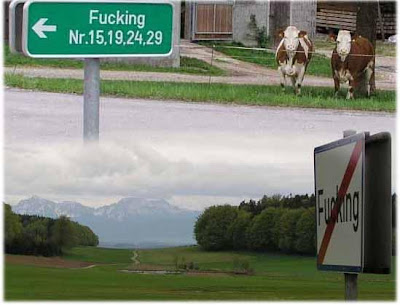 "The European Union trademarks authority has permitted a German firm to register the brand name "Fucking Hell" for a new beer, much to the irritation of the Austrian village of Fucking.

In English, the term "Fucking Hell" is just an expletive used to express irritation or surprise. In German, it could refer to a light ale from Fucking in Upper Austria, because "Hell" is a term for light ale in southern Germany and Austria. The problem is that Fucking has no brewery, and the town's mayor, Franz Meindl, is not aware of any plans to build one there.

The Trade Marks and Designs Registration Office of the European Union said in a statement that it had rejected a complaint that the trade mark "Fucking Hell" was upsetting, accusatory and derogatory.

"The word combination claimed contains no semantic indication that could refer to a certain person or group of persons. Nor does it incite a particular act. It cannot even be understood as an instruction that the reader should go to hell," the Office said in its statement."

Thanks for the heads-up Giac.